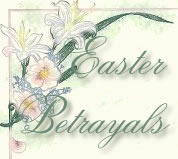 What a week!  After deciding to study Biblical accounts of the final week in Christ’s life on earth for myself –  I’ve got to tell you – my understanding is being re-shaped. And I’ve barely scratched the surface!

In Western Christianity, the Wednesday before Easter is sometimes known as “Spy Wednesday” indicating it is the day Judas Iscariot first conspired with the Sanhedrin to betray Jesus for thirty silver coins. Matthew 26:14-16, Mark 14:10-12, Luke 22:3-6.

The Sanhedrin was made up of all the Jewish religious leaders — the chief priests and the elders. It was the supreme court of the nation of Israel which heard appeals from lower courts and tried cases of greater importance than the lower courts. It consisted of  71 members headed by a president, vice-president and a sage or referee whose duty was to put into proper shape the subjects for discussion. The vice-president led and controlled the discussions and the president represented the nation before the Romans.

So on Wednesday these religious leaders gathered together in the palace of Caiaphas, the high priest. During their meeting they decided to kill Jesus, before Passover if possible. But, because they were afraid of a riot among His followers they said, “Not on the feast day.”

In the meantime, Jesus was in Bethany, at the house of Simon, the leper. During the meal Mary, the sister of Martha and Lazarus, no doubt prompted by the Spirit,  poured a quantity of very expensive ointment made of spikenard over his hair and beard. Some of the disciples were indignant about this, calling it wasteful,  since the oil could have been sold to support the poor. But Jesus told them, “Leave her alone. In pouring this ointment on my body, she has prepared me for my burial.” Matthew 26:6-13

Judas, the one scripture tells us Christ knew would betray Him even before he was chosen as a disciple, left the others and went to the Sanhedrin. He offered them his support in exchange for money. From that moment on Judas was looking for an opportunity to betray Jesus.

For years I have complained about the numerous betrayals in my life, once telling a friend I trusted and loved “You betrayed me!”

Her response, “I know you feel betrayed, but it was the only thing I could do.”

To which I replied, “Oh, that makes it alright then! (sarcasm) Everyone I’ve ever loved, except Dick, has eventually betrayed me.  There’s no reason to think you would be different!”

Betrayal!!!  Small disloyalties that can be interpreted as unfaithfulness, treachery, infidelity, and ultimately betrayals. There are small betrayals, huge betrayals, deliberate betrayals, and unintentional betrayals!  Only someone you love and trust can betray you. Today I understand this!  Strangers cannot betray you. Because they don’t have the power to hurt you.  Loyalty can only be expected from someone whose loyalty ’should’ lie with you.  We don’t expect loyalty from strangers!

I don’t think so.  From today forward, in my simple understanding, this will be known as

Jesus was betrayed! By those he loved and trusted. Repeatedly!

A small, although not insignificant, disloyalty among the disciples cropped up over Mary’s loving gesture during supper on Wednesday.

Imagine it if you can… They are all gathered at the home of Simon, the leper. Jesus being who Jesus is, makes it likely their host indeed had leprosy when he met Christ, but was healed.  So Simon became a follower and benefactor of the ministry. Some scholars think this may be Simon the Pharisee who Dr. Luke wrote of in Luke 7:36-50. (possibly Shimon Ben Gamiliel, a sage and leader among the Jewish people and a direct descendant of King David).    But in any case, during the meal, Mary of Bethany approached Jesus carrying a tiny marble flask of perfumed oil, and in keeping with the traditions of the time, broke the seal and poured the oil over his hair and beard. Now understand—this was no small thing. It was a great act of love. Jesus saw it for what it was, and said she would be remembered forever, whenever the gospel was preached.

For several reasons the people in the ancient world devoted great attention to the use of fragrances, perfumes and anointing oils. Perfumed oils were used for religious purposes, in funeral rites, for cosmetics, as aphrodisiacs, and prior to the invention of soap and shampoo, oils were used to anoint the scalp to prevent head lice. It was customary to offer guests water to clean the dust from their feet and oil to rub on their faces as protection against damage from the scorching Middle Eastern sun. The spices and fragrances used for these oils were not indigenous to the region of the Holy Land. They had to be imported from Arabia, Persia (modern day Iran), India and elsewhere, making them extravagantly expensive, and highly valued.

Apparently Jesus disciples were more concerned over the cost of the perfume than their leaders impending death.  They became furious. “That’s criminal! A sheer waste! This perfume could have been sold for well over a years wages and handed over to the poor.” They swelled up in anger, nearly bursting with indignation over her action. Mark 14:3-18 The Message*

“Forgive us our sins as we forgive those who sin against us.” As always, he practiced what he preached even in the face of such disloyalty; such betrayal.

Then Judas Iscariot, one of the Twelve, one of his hand-picked disciples, went to the Jewish high priests and offered to betray him!

These religious leaders, who had been scheming for months to find a way to get rid of Jesus, couldn’t believe their ears.  Here was one of his own men, offering him up for a few coins! Reading the words of Judas Iscariot, “What will you give me if I deliver him to you?” makes me angry and sick at heart.  Yet, it was the only thing he could do. Like my long-ago-friend he had to do what he had to do in order for God’s plan to succeed.

It was a huge betrayal!  It was a huge betrayal with eternal implications! Matthew 26:14-16 And, it meant the end of the road for the traitor! Judas, that infamous disciple, whose kiss of death will forever sound through the annuls of history, hanged himself, but not before trying desperately to recant what he had done. Matthew 27:3-10, Acts 1:16-20

I found copious footnotes speculating about Judas during my study.  There are scholarly theories on who he was (not a Galilean, like the other disciples), why he was chosen last of the Twelve, whether there was always some alienation between him and the other eleven….and so on and so on.

I think Luke probably hit the nail on the head when he wrote, “Then satan entered into the mind of Judas Iscariot….”  Luke 22:1-6, Phillips   Please note, that is satan; the big gun in hell. Not one of his lieutenants, or corporals; not a prince of power or the governor of a principality, not a demon or an imp out of the fire…the CEO himself.  I think probably Jesus understood, when he recruited Judas, exactly how susceptible the man would be to the suggestions of the enemy.  It looks to me like there were telltale signs all along.  Judas was greedy, pilfering coins out of the money box. He was full of pride, had a sanctimonious attitude and showed little or no respect for his teacher.  In short, Judas was a rebel! Know anybody like that?  I could take a side path here and write about the pitfalls of rebellion for a day or two, but this isn’t the time.  I’ll just suffice it to say, rebellion, in God’s estimation, ranks right up there with witchcraft. 1 Samuel 15:23 And anytime a follower of Christ gets off into rebellion they open the door to their mind and invite the powers and principalities of hell to walk in and throw a party.  The outcome is, always, disastrous.

So…Judas snuck off to find the Jewish executive board, betrayed his boss for pocket change and then began looking for an opportunity to hand him over to them when no crowd was present to object.

Now get this… Judas went back, maybe even back to the dinner at Simon’s place, to keep company with Jesus and the others.  We know he was still with them on Thursday, as they ate the Passover meal in the upper room.  Talk about giving the enemy party space in your mind!

I’ve known for years Christ’s followers are dogged by the enemy’s troops.  We all have opportunities, every single day to chose between what is faithful and unfaithful; what is loyal and disloyal, what is rebellious and what is obedient. Peters says the enemy prowls around like a roaring lion, seeking some unsuspecting Christian to devour!

What I’m not sure I clearly understood before is the significance of my choices.

Jesus loved and healed and blessed his followers.  Jesus loves and heals and blesses me.

Mary gave him an extravagant expression of her love, an act those around her saw as wicked indulgence. Jesus saw it for what it was, an act of love.  I wonder.  When I withhold my best expression of pure love for him… does that put me in the same boat with the ones who complained, swelled up with anger and nearly burst with indignation? Does that make me disloyal to the one who gave me a beautiful new life out of the devastation of my past?

I wonder.  When we are sick, but doubt his willingness to heal us until we ‘get it together’ or make amends for our mistakes, is that betrayal? When we stubbornly refuse to accept his sacrifice on our behalf  is that betrayal?

If, after knowing what he knew, seeing what he’d seen, hearing what he’d heard, Judas could open up his mind to the forces of hell and do what he did…?

Yes…betrayal Wednesday about covers it.

It was one day, in the week that changed the world, but it is a day I won’t soon forget. Because it has given me a crystal clear picture of what betrayal is really all about. And with God’s help, I will forever be more aware that my actions and choices can betray Christ’s love for me in small ways and huge ways; in deliberate ways and in unintentional ways.  I choose not to betray him. I choose instead to spend my resources in acts of love. With His help, I can.

I can do all things through Christ who strengthens me!