Truly, I say to you, whoever says to this mountain, ‘Be taken up and cast into the sea,’ and does not doubt in his heart, but believes that what he says will come to pass, it will be done for him. Mark 11:23 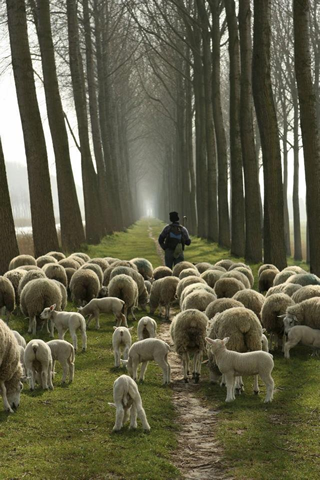 Excerpt from The Week That Changed the World (HERE)

And Finally – In Closing
In the morning… I’m going to take the liberty of assuming it was Tuesday morning, since Luke and Mark both record these events as taking place on the day after Jesus cleared the Temple…

In the morning, as they passed by, they saw the fig tree withered away to its root. And Peter remembered and said to him, “Master, look! The fig tree which you cursed has withered.”

As they continued on toward the city Jesus answered them, “Have faith in God. Truly, I say to you, whoever says to this mountain, ‘Be taken up and cast into the sea, and does not doubt in his heart, but believes that what he says will come to pass, it will be done for him. Therefore, I tell you, whatever you ask in prayer, believe that you have received it, and it will be yours.” (Mark 11:20-24) “But when you are praying, first forgive anyone you are holding a grudge against, so that your Father in Heaven will forgive you your sins also.” (Mark 11:25 LB)

Within a short time they were back in Jerusalem where the Jewish leaders swarmed around Jesus demanding to know by what authority he had driven the merchants out of their Temple.

To me it seems unlikely that the Lord spoke to the barren fig tree out of anger or frustration. But every commentary I picked up offered a slightly different “reason” why he would do such a thing. While I agree his action probably had a much deeper meaning, and that the Lord did nothing without good reason, Christ never once gave an interpretation of what he did. He did not leave us believing that any part of it needed interpretation. His application of what is written about certain events was sufficient as to their meaning.

I wonder if his disciples caught the significance of the timing?

Have faith in God! Forgive anyone you are holding a grudge against. Don’t let what you are about to see and hear rob you of your faith and God’s forgiveness. I wonder how many times, as we walk through the hard places in our lives Jesus would give us the same advise? “Believe. Believe that what you have prayed for and trusted God for will come to pass. Don’t allow the bruises on your soul tempt you to carry a grudge. Things are not as they appear. Have faith.”

The Jewish religious leaders, the Pharisees and the Sadducees dogged his steps all day Tuesday, trying to catch him in some infraction that would allow them to condemn him. They questioned him about his faith, about his choice of friends, about his political point of view. Everything! Why do you eat with tax collectors and sinners? Should we pay our taxes? Do you pay your taxes? What is your position on marriage? What commandment is first of all?

Throughout the day crowds gathered around him as they had done for months. He taught them in parables, knowing they would hear, but not understand his words; knowing that by Tuesday of next week they would remember his words and finally they would understand. He was the bridegroom of the marriage feast. He was the son killed by the wicked tenants. He was the willing son sent to work in his Father’s vineyard. (Matthew 21:28 – 22:14, Mark 12:1-12, Luke 20:9-18)
He was the love of God, come to earth to atone for the wickedness of man.

Distilled down to a single sentence, Jesus’ message to the crowds on Tuesday was “Whatever you do, don’t miss heaven, and make sure you have something to show for the time you spend on earth.” Use your talents. Don’t be a fruitless fig tree. And, perhaps most importantly, love the Lord your God with all your heart and with all your soul, and with all your mind, and with all your strength. Love your neighbor as yourself.

And, as is so often the case when there is a move of God in the making, the religious leaders never backed off. They pushed and pushed and pushed; working to discredit him and cast doubt on his teaching. Try as they might, they couldn’t trap him into saying anything incriminating. His answers caught them off guard and left them speechless.

Finally, toward the end of the day he’d had enough, and in the hearing of all the people he said to his disciples, “Beware of these experts in religion, for they love to parade in dignified robes and to be bowed to by the people as they walk along the street. And how they love the seats of honor in the synagogues and at religious festivals. But even while they are praying long prayers with great outward piety, they are planting schemes to cheat widows out of their property. Therefore God’s heaviest sentence awaits these men. Luke 20:46-47 LB

The Message Bible…puts it like this….
“Watch out for these religious scholars. They love to walk around in academic gowns, preen in the radiance of public flattery, bask in prominent positions, sit at the head table at every church function. And all the time they are exploiting the weak and the helpless. The longer their prayers, the worse they get. But they’ll pay for it in the end.”

Phillips translations says…. “These men are only heading for deeper damnation.”

I think Jesus spent his final Tuesday on earth working to mop up the mess made by religion; working to bring healing and unity to a people oppressed not only by the Roman government of the day but also by the church leaders, elders, deacons, bishops, etc, etc., etc. I think his intention was to give these simple people – the farmers, the fishermen, the vintners and craftsmen – who followed him hope. He knew they were going to be tested dramatically within the coming few days. He knew some would falter and some would fall. He knew all would question; question him, question God, question their faith and their love and even their very reasons for living.

John, the beloved disciple tells us, “And Jesus cried out and said, “He who believes in me, believes not in me, but in him who sent me. And he who sees me sees him who sent me. I have come as a light into the world, that whoever believes in me may not remain in darkness. If any one hears my sayings and does not keep them, I do not judge him; for I did not come to judge the world but to save the world. He who receives me and does not receive my sayings has a judge; the word that I have spoken will be his judge on the last day. For I have not spoken on my own authority; the Father who sent me has himself given me commandment what to say and what to speak. And I know that his commandment is eternal life. What I say, therefore, I say as the Father has bidden me.” (John 12:44-50)

My prayer for each of us – you, me, those we love – is that we will see and hear, and understand this final teaching of our Lord and Savior, Jesus Christ.

Religion does not save.

His entire life, his death and his resurrection was for the single and sole purpose of saving us!

His purpose was saving us from the world that is going to hell at an ever increasing pace, saving us from ourselves and our grudges, unforgiveness and folly, saving us and setting us free to be his followers, both now and in eternity. Remember, he is the same yesterday, today and forever. He is the light sent so we do not have to remain in darkness.

In Jesus’ darkest hour, he gave me light, and hope; peace and joy unspeakable.